6 December 2022
Schooltennis
Alexander Ostrovsky Academy in Dorsten, Germany, in terms of its functionality and significance, gradually becomes on a par with his older "sisters", the Academies in Khimki and Tula. 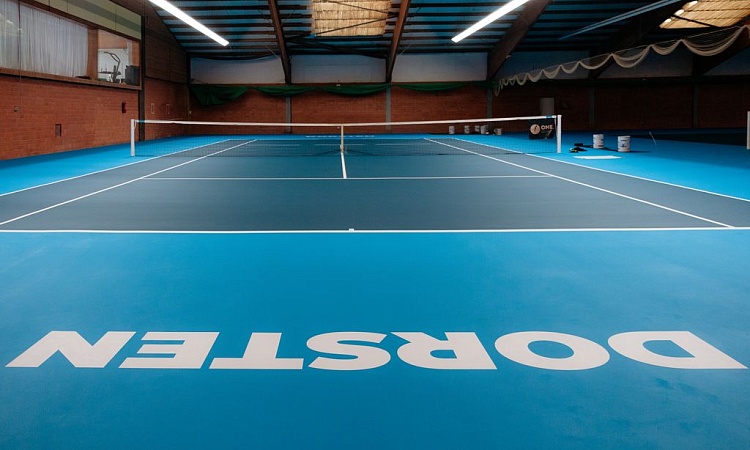 Alexander Ostrovsky Akademy in Dorsten
Alexander Ostrovsky Academy in Dorsten, Germany, in terms of its functionality and significance, gradually becomes on a par with his older "sisters", the Academies in Khimki and Tula. The first European branch of the Academy is rapidly turning into a modern tennis center that meets all the standards for a full training process for professionals and amateurs. 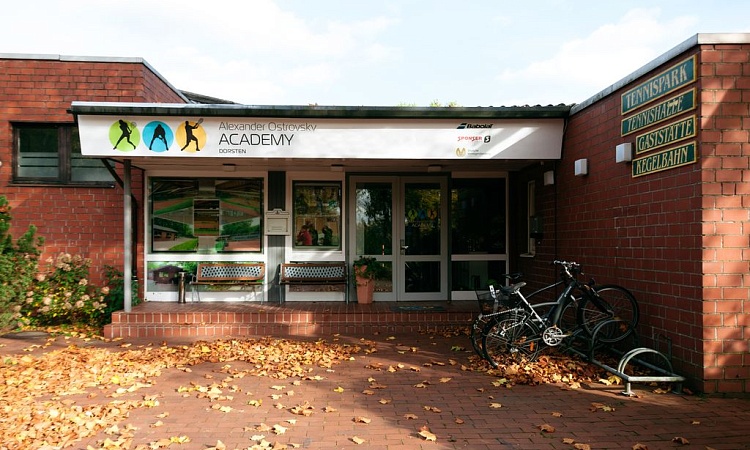 Work is underway to improve the infrastructure and conditions for an uninterrupted training process. So, in October, three indoor hard courts were built for all-season training. 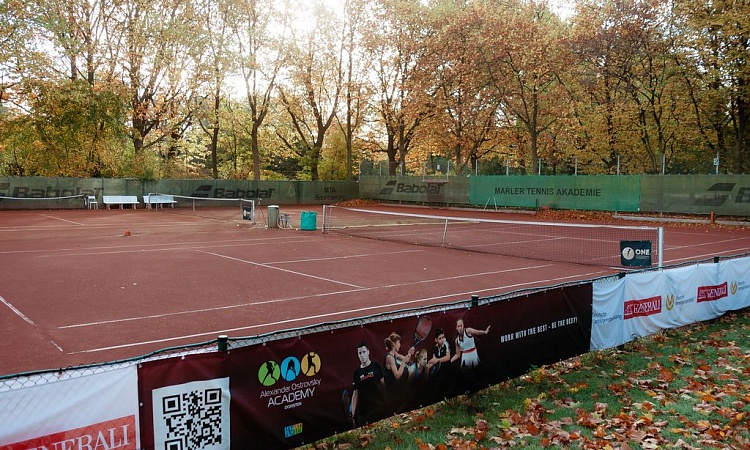 According to the General Director and Head coach of the Academy in Dorsten Dmitry Palenov, "New hard courts will significantly improve the training process: the players will get used to all the nuances of this surface and prepare professionally for tournaments, as there was no such opportunity before. It will also attract young professional players (we are talking about ITF Junior, ITF tour, WTA and ATP players)”. 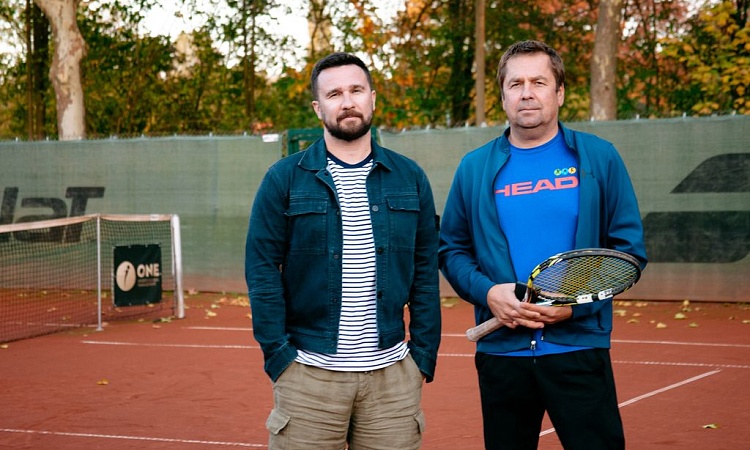 Alexander Ostrovsky and Dmitry Palenov
In addition, Dmitry shared his plan for the 2022/2023 sports season, the first season of the Academy in Dorsten: « It will be a great tennis home and sports base for the athletes who play tournaments in Europe and are looking for the opportunity to train between tournaments. I see great opportunities and prospects are opening up. Since people used to come to Europe for 1-2 tournaments and did not know where to stay, and now they can get a full range of services at our Academy. We are on par with the best and leading tennis academies in Europe».

For the athletes and clients of the Alexander Ostrovsky Academy in Dorsten, there are specially designed exclusive training programs – PRO TEAM, PRO INTENSIVE, «Training & tournament», JTT TEAM, that everyone can choose based on their tennis preferences, level of training and financial capabilities.

The Academy players from Dorsten are strong athletes who are master of sports, national team members, winners of national and international tournaments. 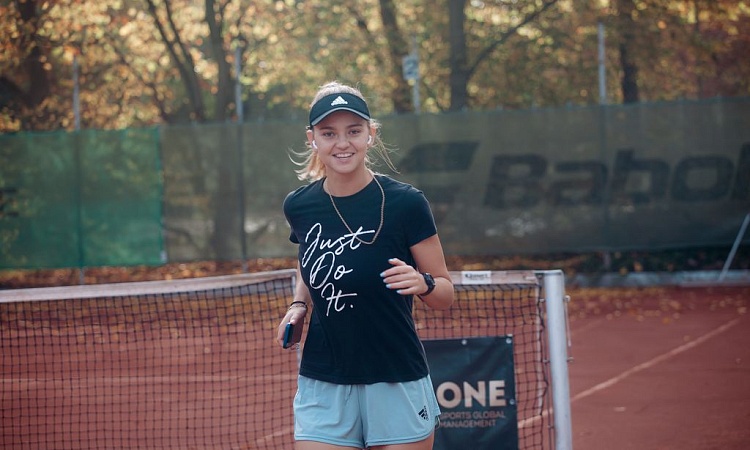 Milana Maslenkova
One of them is, Milana Maslenkova (Master of Sports of the Republic of Uzbekistan. Member of the national team of Uzbekistan, No. 4 UTF). She told us about the tennis training and the conditions at the Academy in Dorsten compared to other European tennis clubs where she had previously trained.

"Firstly, it is a good location of the Academy. It is really easy to go to tournaments, everything is available - both trains and the airport are nearby. A big plus is a hotel on the territory of the Academy. Comfortable accommodation is very important, the opportunity to rest after a workout.

Also, here are many good players in the Academy, with whom you can get game practice". 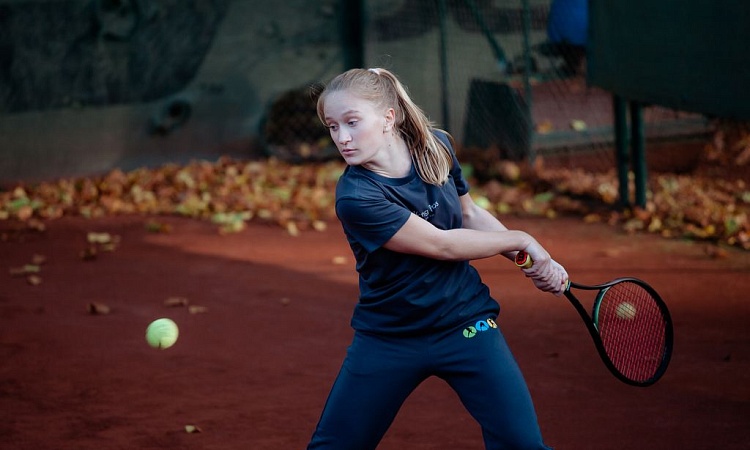 Alina Korneeva
Alina Korneeva participant of Tennis Europe and ITF Juniors tournaments shared her impressions of studying at the Alexander Ostrovsky Academy in Dorsten, and told us about her goals and plans:

"Excellent location, competent specialists, strong players among the students of the academy. The plans are to steadily improve sportsmanship, grow psychologically, enter the TOP-300 ITF Junior". 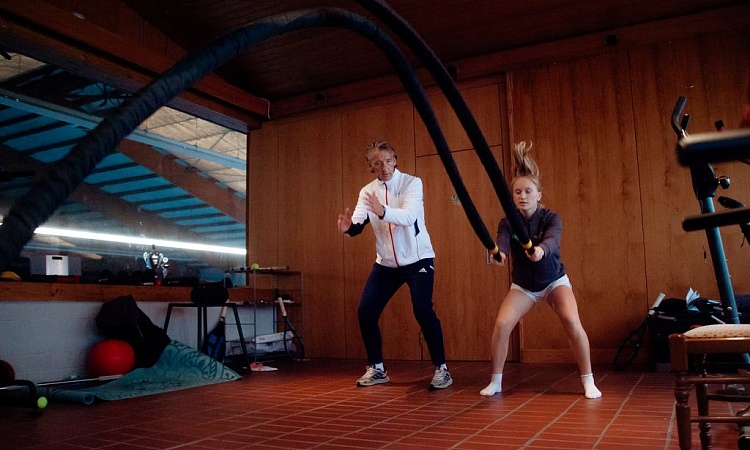 Alina Korneeva and fitness coach Andreas Shilasky
Julia Avdeeva (winner of the championships of Russia, Tennis Europe and ITF tournaments, participant of WTA tournaments), first of all she wants to improve her position in the WTA ranking, “to get into the TOP-250 in Singles". 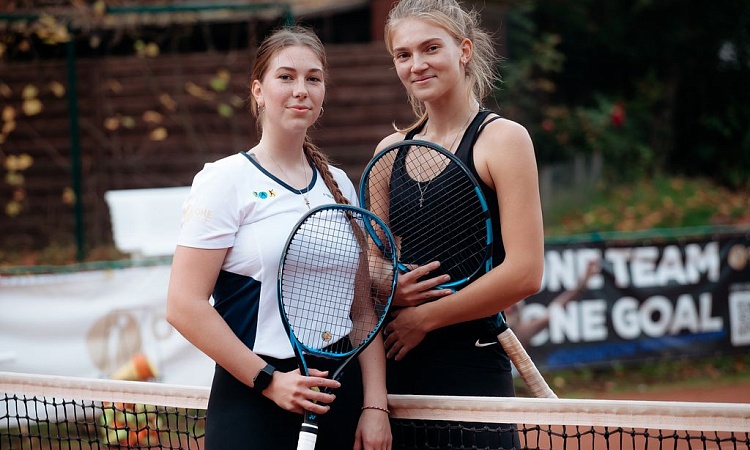 Julia Avdeeva (on right) and coach Anna Sashkina (Head of 10s Minitennis)
In addition, Julia told us about how she and other Academy players spend their free time. After all, the life of a professional player is not limited to tennis alone. Moreover, the location of the Academy (almost in the center of Europe) opens up good opportunities for athletes to travel.

"In our free time, we travel to different cities nearby (Düsseldorf, Münster, Duisburg, Essen). If there is more time, then we can go to Holland for the weekend. We go to the sauna, the swimming pool and do yoga. During the summer, we have our own swimming pool on site next to the clay courts. In the evenings we watch movies and play board games", - mentioned Julia. 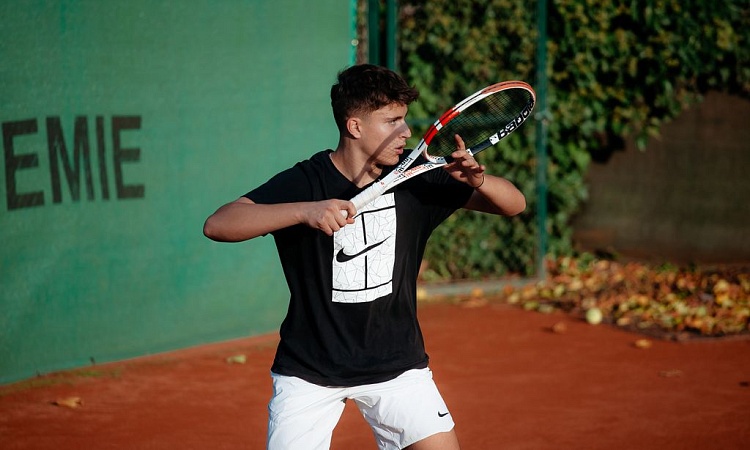 Marlon Shilasky
"Constantly improve myself" – this is the plan of Marlon Shilasky (WTV No. 6 U16, member of the Dorstener TC team). Marlon noted the quality of new hard courts:

"The academy trains professionally and you still have a lot of fun, you can train under optimal conditions seven days a week!!! The new hardcourts look really good. I really like it, a lot of fun to play on. You feel like you are in Australia. 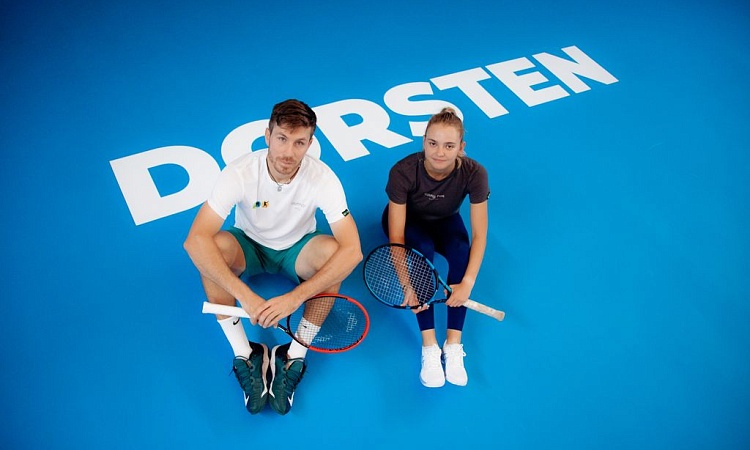 Tennis coach Yan Sabanin and player Milana Maslenkova on practice
Academy team of coaches will help to reach the player's full tennis potential, optimize the strengths and improve the weak moments of the game. As well to improve such an important component in the training of professional athletes as physical training, based primarily on the endurance of the player and the prevention of injuries. 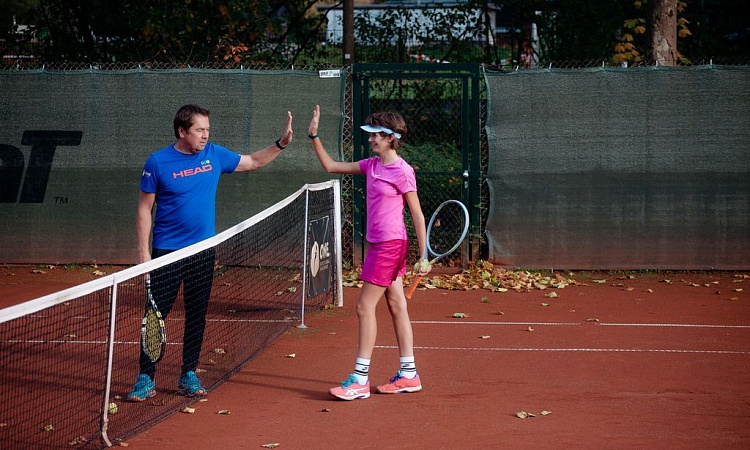 Valentina Kirsh and head coach Dmitry Palenov after practice
An experienced specialist, Andreas Shilasky works with the athletes of the Academy in Dorsten. Andreas is the ex-coach of the German triathlon team (2002-2008), Ironman and World Championships Hawaii participant. 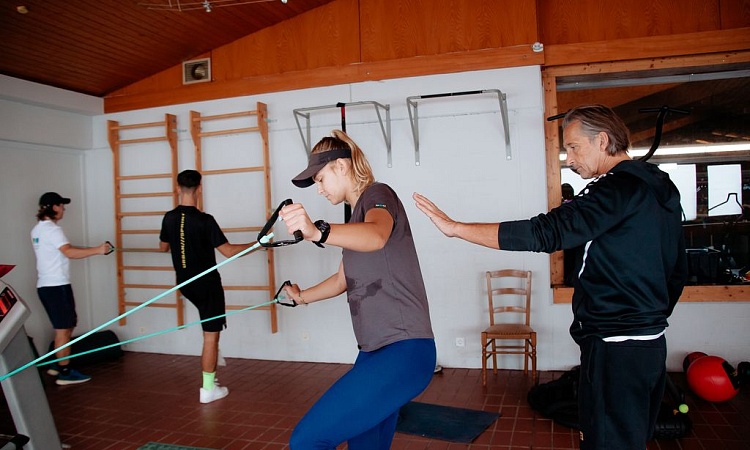 Milana Maslenkova and fitness coach Andreas Shilasky
"The Best place for preparations and Training is a professional tennis Academy, which is led by motivated and professional coaches. Our plan for this season is to renew the Gym to have better opportunities for functional training. 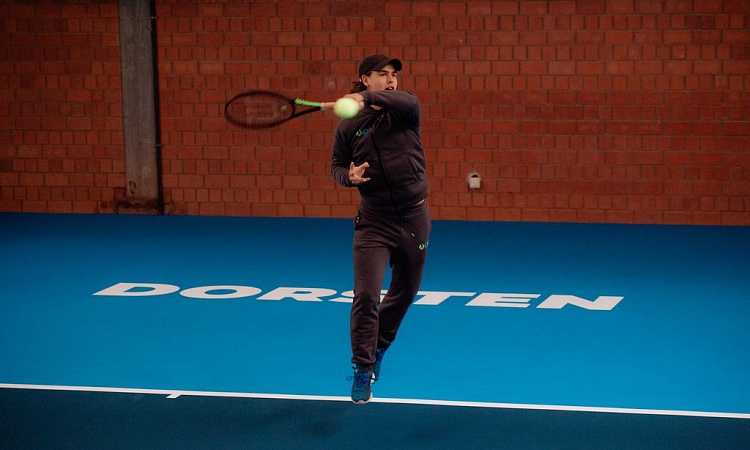 Egor Viktorov on practice
In tennis it is important to train complex. It is very important to prevent injuries. On this level, the players have to do at least 4 hours Fitnesstraining a week. And every tennis player at the Academy has his own exclusive fitness program, specially built for each one, taking into account his athletic preparation and current physical condition. The athletes should improve themself, nevertheless, the fun should not be missing even if it‘s exhausting". - told Andreas about the programs and methods that he uses for training at the Academy".

Join us and become the part of the friendly and close-knit team of the Alexander Ostrovsky Academy in Dorsten. Achieve success with professionals! 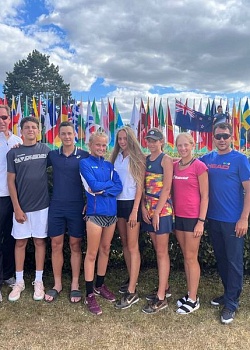